Undertale is a game that’s very difficult to review without spoiling.  Half the fun of the game is discovering the myriad of silly characters, songs, and even gameplay mechanics that are buried within.  This is a game where I refused to listen to certain tracks on the soundtrack until I had heard them in-game; I considered the MUSIC to be a spoiler.  So, full disclosure before I really get going: there will be mild spoilers.  If you have some degree of interest in the game, I highly recommend that you check it out.  I don’t think that you’ll be disappointed.  However, if you’ve played the game already and want to see if you can feel validated in your opinions, or if all you’re thinking right now is, “What’s an Undertale?” then by all means, stick around.

The game starts off with the protagonist falling into a mountain and somehow surviving.  When they wake up, they find themselves in a world populated by monsters.  After being rescued from a mischievous flower and escorted through the ruins, they are soon set free into a land of pasta-loving skeletons, fearsome fish warriors, and anime-addicted dinosaur…like…things.  Oh, and absolutely FABULOUS robots.

If that last paragraph doesn’t already have you intrigued by the premise, let me tell you that it is executed PHENOMENALLY.  The first time I played through this game, I lost count of how many times I was laughing hysterically at the ridiculous scenarios being played out on-screen.  The writing is some of the best that I’ve ever seen in a game, deftly switching between exposition, comedy, and drama in a way that always kept me invested. 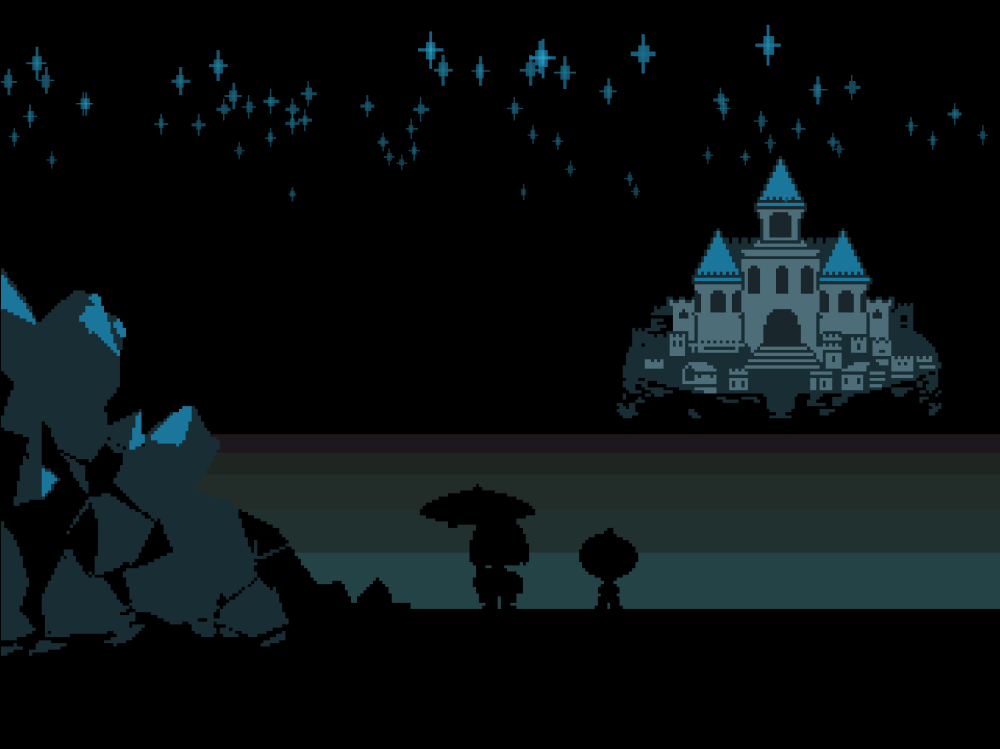 The colourful pixel-art characters are incredibly emotive as well.  I’ve seen high-budget AAA games that spend thousands (maybe millions) on advanced graphics technology and motion capture, only to spit out characters with a fraction of the personality of some of the SIDE characters in Undertale.  Love it or hate it, there’s a reason why this game has such a large fan community.  These are characters that could easily stand the test of time and become icons like Mario and Sonic.  Plus, considering the game was largely developed by one person (Toby Fox), it makes the writing and characterization all the more impressive.  It’s even capable of bringing things down to a sobering level of thoughtfulness.  Undertale manages to touch on topics such as emotional detachment, depression, and even suicide in a way that feels very grounded in reality, despite the fantastical setting and cartoony characters.

While it may seem strange for a game to hit so many emotional notes during its (moderately short) runtime, there’s an important reason for that: Player choice matters greatly.  According to a friend of mine, the game was designed to focus on player choice ACROSS playthroughs.  In games such as Mass Effect and Deus Ex, player choice is limited to the current save state.  If you quit and reload without saving, you can retry things.  If you start a new file, the world resets to its default state and you can make new choices without anyone in the world having any idea how right (or wrong) things went previously.  In Undertale, that doesn’t necessarily happen.  Certain choices stick around, to the point where the only way to undo them is to go into hidden cache files on your computer and change or remove values.  Not even uninstalling the game will remove the marks that you’ve made on the world through your character.  As such, if you kill an NPC in one playthrough, on the next playthrough they may seem a bit uncomfortable around you.  Perhaps they’ll be more aggressive.  Maybe they won’t be there at all.  Regardless, a precedent has been set, and you can choose to attempt to right past wrongs or just make things even more difficult for everyone. 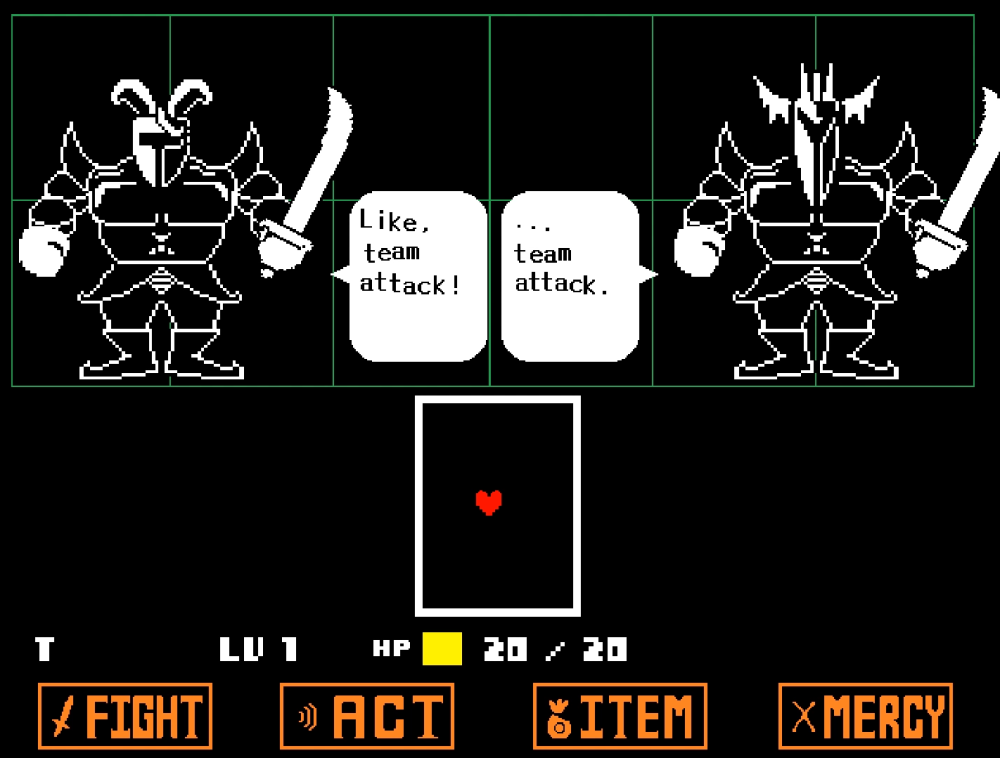 Speaking of which, you have one key method of changing the game world: fighting (or not).  Beyond battles, the game mostly consists of walking around and interacting with various objects and characters.  There are some light RPG elements that allow you to buy healing items, upgrade your equipment, etc., but the main focus is the combat screen.  The game presents you with four options in each battle: Fight, Act, Item, and Mercy.  Fight lets you attack a monster you are fighting, Item lets you use an item in your inventory, and Mercy allows you to spare or run away from the monster(s).  After you’ve taken your turn, your opponent has a chance to attack, at which point you move your character’s soul (represented by a heart) around the screen to dodge their attacks.  By and large, the combat is like Pokemon meets bullet-hell games, though lots of variation is added through the game’s boss fights.

However, the interesting part is the Act menu.  Depending on who or what you’re confronting, you are presented with different options that allow you to interact with the monsters you fight.  If you make the right choices on this menu, you can avoid the fight altogether, possibly even befriending your foe in the process.  In a lot of cases, these interactions are even more entertaining than the actual fighting mechanics.  Whether you’re playfully splashing a muscle-flexing horse creature or giving two imposing guards the chance to *ahem* open up to one another, there’s something new around every corner.  The game gives you the space to choose whether you want to fight to become the strongest in the world, just make friends, or do something in between.

Now, before you get all pissed about yet another reviewer having nothing bad to say about Undertale, I will mention that I have a few gripes.

For starters, the opening area in the ruins is arguably the weakest part of the game.  The environment isn’t all that interesting, a lot of the humorous and quirky characters that appear later are completely absent, and the music isn’t that enjoyable.  It’s gotten to the point where I’ve had to tell friends to, “Just reserve judgement until you get out of the ruins.”  This is a game that will already feel dated in its design to some thanks to its “retro” aesthetic; I think that it’s to its detriment that it can take a little while to “get into it”.

My other issue is that the writing can grow stale on subsequent playthroughs unless you’re going for a drastically different path.  The two main playstyles that people discuss for the game are “pacifist” (spare everyone) and “genocide” (murderize everyone).  If you just do these two, you will have a wildly different experience each time.  However, it’s on the runs where there are only subtle changes that things become repetitive.  Personally, I’ve done four runs at the time of writing:

In particular, there were very few differences between the first and second runs.  Even in the third run, a lot of dialog from secondary characters remained unchanged.  It got to the point where I would just quickly skip past conversations or ignore certain side areas because I already knew what would happen or be said; I just wanted to get through the game.

Despite those complaints, it still comes back to whether or not I would recommend Undertale.  Unsurprisingly, my answer is an extremely determined, “YES!”  It has some minor problems as far as I’m concerned, but the rest of the product is so incredibly polished to a mirror sheen.  The story and characters are among the best I’ve seen; the gameplay can be relaxing, but also incredibly challenging (that final boss fight…you know the one); and the music…oh my word, the music.  Let’s just say, unless you are vehemently opposed to the idea of chiptune-style compositions, this is some of the best video game music you can forcibly insert into your earholes; isn’t that a lovely image?  In fact, I’m listening to the soundtrack right now, and there are still tracks that make me bob my head after more than 70 listens.

Undertale is a game that’s made me laugh, almost cry, and think.  And whether I find myself continually returning to the world beneath Mt. Ebott or simply placing it aside as a treasured memory, it’s a game that will always live on in my heart.

Stay determined out there, folks.