As some of you may know, I’ve never really been one for streaming.  I find it difficult to make the show entertaining in a way that keeps people (even my friends) engaged.  It’s why my forays into the world of live-streaming have been so short-lived; there’s only so much you can stare at a viewer count of 0 before you start to get discouraged.  However, if there’s one game that’s made me think about getting back into it, it’s Russian Subway Dogs.  It’s been a long time since a game elicited such visceral reactions; from joy to anger, and even soul-crushing disappointment in my skills and abilities.  And though it took me in excess of a year to finally sit down and write about it (thanks, spontaneous hiatus), I can safely say that I’ve enjoyed it just as much (if not more so) than I did all those months ago.

Russian Subway Dogs is based on a set of real-world occurrences: namely, the increasing presence of stray dogs showing up on the trains of the Moscow subway system.  These dogs survive primarily by scrounging for food, but they seem to have learned that staying in one place means an endless Darwinian battle with the same set of dogs.  The solution? Hop on a subway, go to a different station, and hunt around there for a while. 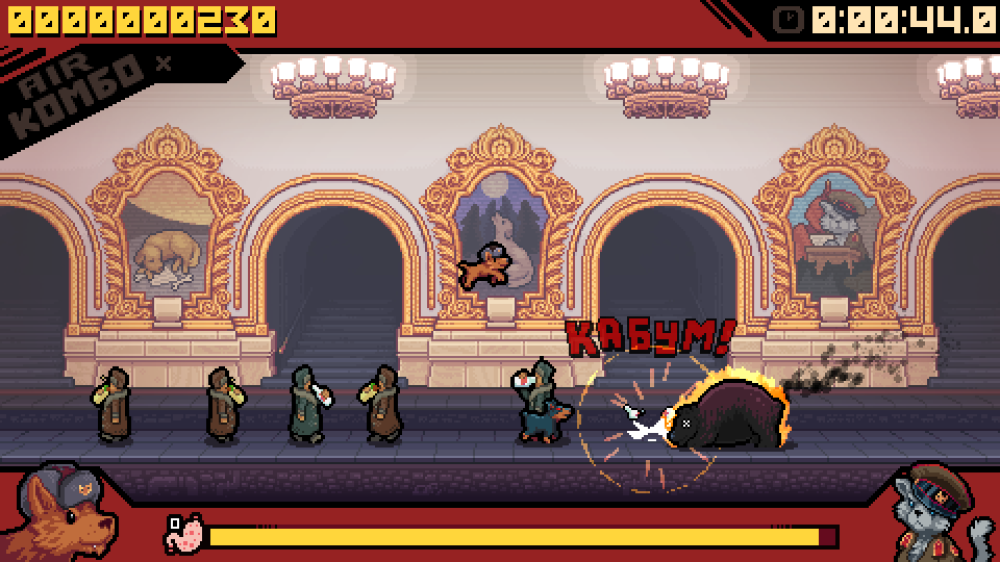 Take this somewhat mundane – albeit adorable – situation, turn it up to 11, and you’ve got Russian Subway Dogs.  As a-

hold on, hooman.  its dog turn. to talk about dog game.

Oh, uhhh, okay…everyone, this is Karl, my imaginary dog, and he’s going to tell you how this game is played.

okay.  you pupper.  but wearing russian furry hat.  looks nice. to chew on.

you sneaky behind hoomans.  give loud bork. hooman get a scare.  and drop yummy meat wrap. sometimes borger.  yummm borgers…

but sometimes hooman.  drop clear liquid bottle.  it smell bad and make big explode.  do me a scare. but also do hooman a scare.  and make food roasty toasty. taste even more yum.

Here you go, Karl!  Some fresh red meat just for you.

Okay, so as Karl mentioned, if a bottle of vodka explodes next to someone, it cooks the food they’re holding (and their behind), which makes it worth more points.  Plus, if you catch food before it touches the ground, you’ll get extra points and build up your “Air Kombo” meter. This is critical to your success (particularly in the later levels), as – when the final train approaches to take you to the next station – you can only beat the level if you’ve reached a certain point threshold.  If you manage to exceed this threshold, you can get an increased letter rank, all the way up to S.

The catch is your hunger meter.  This bar constantly goes down, but its decline is hastened by taking damage, consuming chocolate, and yes, barking.

hooman i need to tell them.  that chocolate do bad to doggos.  you can eat in this game sometimes.  but always need other food to live. and real doggos no eat chocolate.

Thanks for the PSA, Karl!  Here’s another tasty treat for you.  (For the record, the game also gives you a similar warning to never feed chocolate to animals.) 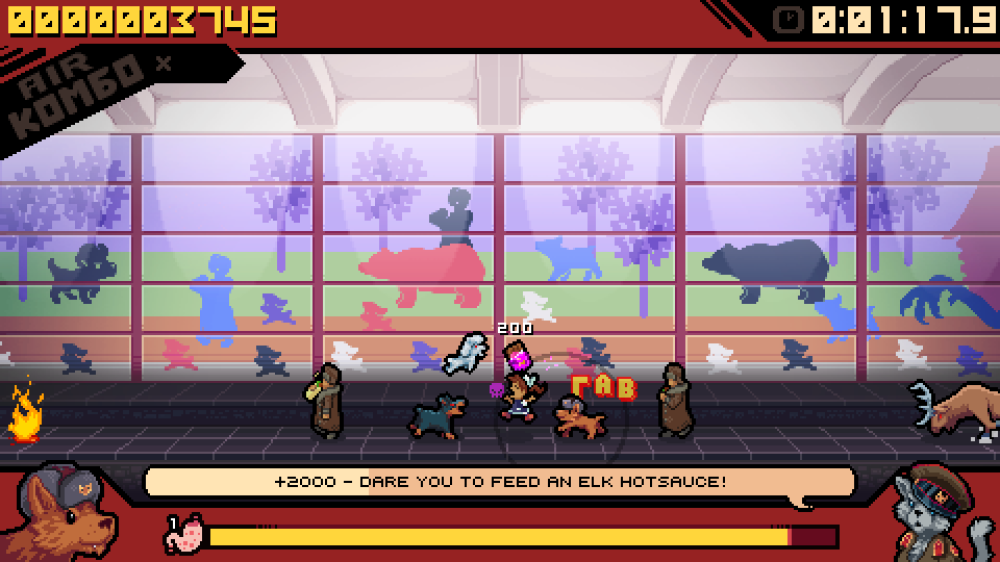 Not only is barking used for scaring people into dropping food, it’s also used for juggling items.  Bark at the right time under a descending vodka bottle, and it’ll get bounced back up into the air, complete with an extra multiplier point on it.  However, the hunger metre means that – much as you may want to juggle a vodka bottle until you bring it down on an unsuspecting burger boi for a delicious 20x multiplier burger – you’ll probably die before it happens.  And for the record, yes, “burger boi” is a technical term. However, if a vodka bottle explodes next to someone with another vodka bottle, the multiplier gets transferred to the new one. So, in a perfect world, you can launch a 5x bottle at some people, get another 5x bottle out (plus some food to keep you going), and continue to get more points that way.

Of course, things rarely go as smoothly as you may want, which frequently results in chaotic situations you can merely shake your head and laugh at.  One of my favourite moments was when I started a combo by launching some vodka into an unsuspecting crowd, a couple people in that crowd screamed and dropped vodka bottles, and before I knew it, I had a self-sustaining combo.  There was vodka exploding everywhere, flaming people running around flinging groceries, and I was laughing my head off while trying to grab all the veggies and not get blown up.

Above all, your biggest foe in the subway is undoubtedly rival dogs.  Friends who watched me play this game can attest to my frenzied screams of frustration with these furry foes, to the point where I once let out an evil cackle while chanting “BLOW UP THE POODLES!!!”  Please note that that was entirely in the context of the game; dear Internet, I don’t literally want to blow up poodles, okay thank-

You alright there, Karl?

you say poodle.  the meanest dog. let me handle this.  dear hooman.

poodle worst dog.  all doggos good. 13/10.  but poodle worst good doggo.  poodle yip yap all the time. make my ears hurt.  but the worst thing. is poodles steal yummy food.  jump up more than i can jump. and eat food before me.

Exactly, Karl.  And to top it off, when other animals eat food, you lose points equal to however much the food was worth.  I’ve had entire runs ruined simply because the poodle population on a level got out of control.

and poodle with coffee.  is even worst poodle. too fast.  zip everywhere. jump even more high.  no food for karl. better to hit with explody.  or hot sauce fire. then karl get food instead.

So, suffice it to say, poodles were the bane of my existence in this game and are the worst dog.  Simple facts and logic, guys; I don’t make the rules.

By far the weakest part of Russian Subway Dogs was the handful of levels themed around Spooky Squid Games’ earlier work: They Bleed Pixels.  Eschewing subways, humans, and food in favour of bombs and inky cephalopods, they just feel uninspired compared to the rest of the game.  The bombs are harder to do interesting things with, the enemies are small and difficult to track, and the levels generally feel like half-finished ideas more than anything.

That aside, Russian Subway Dogs is a wholly fantastic experience.  Between an endless mode and missions for each level, there’s a ton of replay value here, and I constantly find myself wanting to go back and perfect all the levels before moving on to the next game on the review docket.  The game is consistently charming, between its adorable character animations, goofy sense of humour, and absolutely bumpin’ soundtrack (seriously, Coins/Peter Chapman did a fantastic job here). And that’s not even mentioning the bevy of unlockable characters, wacky pre-level dialogue bits between the Proletaricat (did I mention this game is full of communism references and I love it?) and his kitten aides, the stunning-

they get it hooman.  you like game. i like game too.  lots of good boys. even good cats.  tasty food and silly hoomans. all over the place.  best doggo game 13/10. 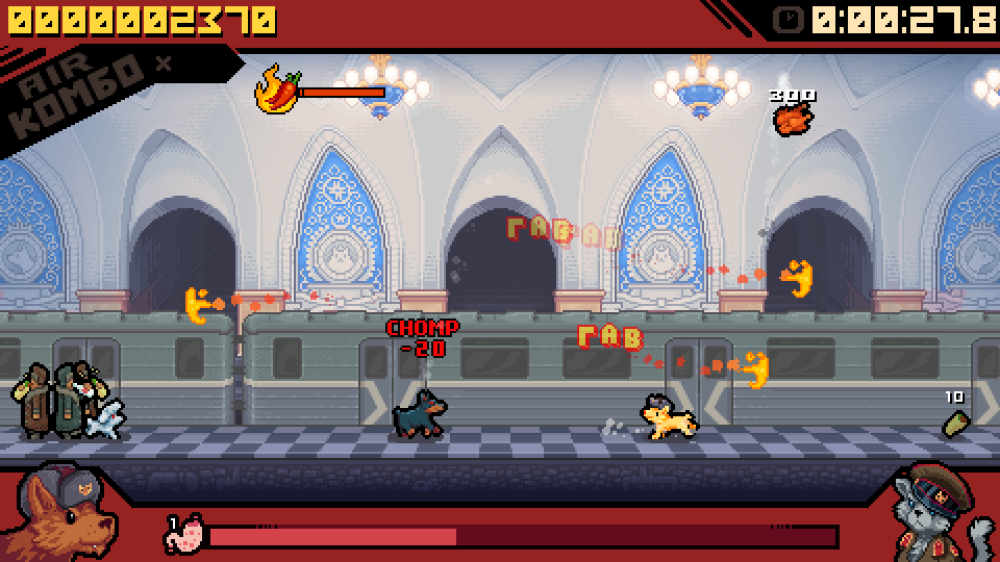 Okay, okay, I’ll stop ranting.  While I can’t give this title the same score as Karl (my scoring system doesn’t support a 13/10, I’m afraid), I have no problem giving Russian Subway Dogs a glowing