Bullet-hells.  Shmups. Bloody impossible.  Whatever you want to call them, there’s no doubt that the genre formed around throwing buckets of bullets at people like some overzealous member of the NRA has garnered quite the cult following.  And while it’s not a genre that I frequently dive into, it has nonetheless provided me with some fantastically intense experiences. Sine Mora EX is an utterly exquisite story-driven shmup, while Astebreed (a title I played years ago but never reviewed) dives down the anime mech rabbit hole in fine laser-slinging form.  So, when I found a copy of Solid Aether sitting in my inbox, looking like the much-beloved (by me at least) OVIVO had a baby soaked in shmup hormones…aaand this analogy is getting out of control.  THE GAME LOOKED COOL, OKAY?!?

Solid Aether is pretty much as barebones as a bullet-hell can get, between its lack of an in-game UI, sparse level completion screens, and straightforward mechanics.  You can move, shoot, and “focus”, the latter of which turns the large box around your character translucent, bringing the core of your humble ship into view while also slowing you down.  See, despite what seeing your bulky square of a ship may make you think, the only thing that matters is that small core; about the size of one of the millions of bullets you’ll be erratically evading.  Bullets pass through everything else, but if that core gets hit, there’s a flash, the bullets are wiped from the screen, and you lose a life. Four of those, and your ship is no more; your crew presumably less-so.  The good news is that your ship’s lives regenerate over time, meaning that – for instance – I died 22 times in one of the levels, but still completed it in one run because those deaths were significantly spaced out.

(Of course, all this talk about ships and bullets is just my own projection onto the game.  Since all the enemies (save for bosses) are squares and you’re a square, who knows what’s really going on?  Maybe you’re a travelling fruit salesman, trying to sell fruit to as many people as possible before they can sell fruit to you.  Truly, the only limit here is your imagination.) 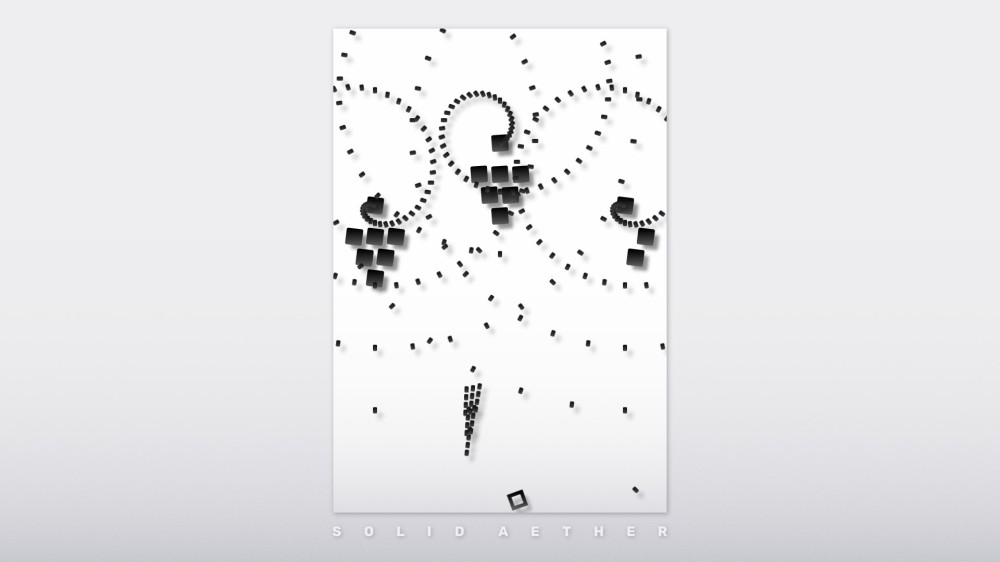 Here’s where we get into a bit of a pickle.  I’m relatively inexperienced with bullet-hells, having not played one since reviewing Sine Mora EX almost 2 years ago.  Yet as a result of the aforementioned regenerating lives and my apparent skill at maintaining them, I – a veritable genre neophyte – didn’t even realize you could fail a level until I specifically tried to; I beat the entire game without a single game over.  The kicker? It took me a mere 40 minutes with nothing motivating me to ever return. Solid Aether has no Steam achievements, no online (or even local) leaderboards, and the only metrics for success in each level are the quantity of enemies killed, time to kill the boss, and the number of times you died.  Sure, there’s an endless mode on offer, but even that only saves one score; you have to choose whether or not you want to overwrite it after each run, even if you scored lower in the new one. That’s right: you can accidentally overwrite your amazing 1,000,000 kill high score with a big ol’ goose egg just by hitting the wrong key.

That’s not to say that the time you spend with Solid Aether won’t be enjoyable.  Bosses ramp up in difficulty with some devilish attack patterns, and if you’re the kind of self-motivated gamer who just likes to try and beat your personal scores, you’ll probably get more mileage out of it than I.  And I’d be remiss if I didn’t mention the great score, which ranges from minimalist background ambience to pulsing electronica and blues-infused piano ballads, all before culminating in the orchestral crescendo that is the final boss theme.

Yet all this for the price of $8 just seems…excessive.  I received my review copy for free, and I have to say I’m grateful for that; I would have been endlessly disappointed with the amount of content available if I had paid full price.  Don’t get me wrong; I don’t expect a massive epic of a single-player campaign when it comes to shmups. However, that should be made up for with other features that encourage you to return.  Leaderboards let you compete against the world for the top score, while achievements can motivate players to pour dozens of hours into simply trying to have one perfect run. Instead, the defining factor of Solid Aether is sparseness; it succeeds in distilling the shmup genre down to its core elements aesthetically, but trims things down so much that it loses one of the most vital things: a reason to return.