Masters of Anima is a game that takes heavy influence from cult classic titles like Pikmin, Overlord, and Little King’s Story.  I know this, despite – unfortunately – having never played any of those.  It puts me in something of an odd position when reviewing Masters of Anima, as mechanics that may feel derivative to fans of similar titles instead come across as fresh and interesting.  Subtle changes to the formula go unnoticed by me, as Masters of Anima – from my perspective – is the progenitor of that formula.  With that in mind, it should be clear that I have no thoughts on how Masters of Anima compares to its contemporaries.  That being said, taken as a standalone product, I found it to be an absolutely wonderful experience! 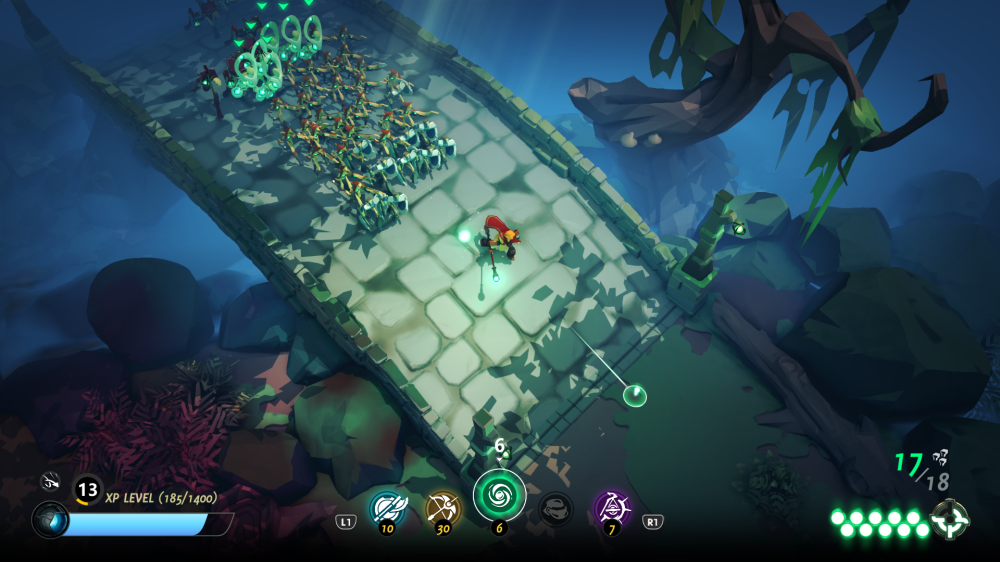 Otto is a young man who is about to become a full-fledged Shaper (basically a summoner) and marry his fiancée: the Supreme Shaper Ana.  However, just after he completes his training, Ana is attacked by a sorcerer named Zahr, who sunders her into her mind, heart, and body.  With the Supreme Shaper out of the way and an army of golems at the ready, Zahr aims to take over the land, and only Otto can stop him; if he even wants to.

See, Otto is a bit of a character, and I don’t mean that in an overly complimentary way.  I get the whole, “Guy who doesn’t want to be a hero ends up having to be a hero” trope, but Otto frequently comes across as simply lazy and juvenile.  He’s motivated solely by a desire to unsunder Ana, and assumes that the two of them will just run away when this task is completed.  If Otto was a kid, I could maybe see it, but for someone who’s about to get married…well, it’s a bit naive to say the least. Really, though, all the characters seem to be pretty over the top.  Zahr’s voice actor frequently sounds like they’re trying to do their best Tim Curry impression, and Ana’s individual parts (capable of communicating with Otto, because magic) each take a component of Ana’s personality and crank it up to 11.  For instance, Ana’s heart thinks literally everything is beautiful, lovely, adorable…you get the idea.  It all ends up feeling more than a little cheesy, but by about the halfway point, I had pretty much settled into the pulpy, Saturday-morning cartoon vibe the game seemed to be going for.

What made that settling in far easier was the presentation.  Despite some moderately low-poly character models, Masters of Anima does an admirable job of covering up any potential weaknesses in its visuals.  Areas are vibrant and distinct, yet I found myself rarely – if ever – losing Otto in the action on-screen.  Plus, the game’s battles can be truly intense, particularly as the foes you’re fighting become ever more enraged.  Red lightning rains down as the battlefield is ignited by explosions.  Enemies light up and transform into ferocious beings of chaos.  Each fight becomes a spectacle in its own right, and the complete lack of noticeable slowdown certainly helps. Now, while Otto is capable of doling out some damage in these combat scenarios, he’s utterly useless without his summoned Guardians.  Starting out with Protectors – defensive units that swarm the enemy and bash them with shields – Otto gradually unlocks access to an assortment of offensive, defensive, and support units.  Sentinels are great at unleashing high damage volleys from afar, but can only take one or two hits before falling.  Meanwhile, Keepers deal barely any damage, but regularly drop Anima (the “fuel” used for summoning) so Otto can continue bringing in reinforcements.  There are a couple other types that I won’t get into here, but the game does a great job of giving you enough choices to encourage varied strategies without overwhelming you with options.  Granted, some of these Guardians may end up being more useful to you than others, but there isn’t really a punishment for leaving some by the wayside.  And sometimes, it’ll just take a while before you can come up with a good use case for them.

Each of these units has an in-combat ability, an out-of-combat ability, and a Battle Cry ability.  The first two are self-explanatory; for instance, Protectors are good at distracting enemies and blocking their attacks in-combat, but are also strong enough to push certain blocks around in the environment during exploration segments.  However, Battle Cry is an ability of Otto’s, with which he consumes an orb of Anima to rally nearby troops and empower them with a special ability for a brief time.  Protectors get to shield bash an enemy, which can stun them if your timing is good.  Keepers toss some health orbs to Otto in addition to Anima.  Of course, the trade-off here is that the same Anima orb that was consumed for the Battle Cry could have been used to summon another collection of Guardians.  Not only that, but Guardians drop a small amount of Anima when they die; Battle Cry doesn’t give any sort of refund.  It ends up turning each fight into a constant risk-reward tug-of-war, with Anima management becoming just as vital as effective troop control as the game progresses. One of my biggest concerns when going into Masters of Anima was that doing all this troop management with a controller would be a nightmare.  In addition to controlling Otto, there are five different guardian types you can summon, each of which has their own purpose and place on the battlefield.  Throw in fights that sometimes feature several enemies at once, and any issues could rapidly become intolerable.  Thankfully, the only real complaint I have is that there doesn’t seem to be lock-on switching; whenever you lock onto an enemy, it’ll simply be the one closest to you.  Everything else – while admittedly taking some getting used-to – worked surprisingly well, despite the game’s frequent reliance on multi-button combos (e.g. R2 + X to summon a new group of Guardians).

Lastly, Masters of Anima does a fantastic job of staying varied and interesting.  New Guardians and enemies are doled out a pace that allows you to get well-acquainted with each, then move on to the next before things get stale.  Levels toss in different mechanics and goals, such as one which sees you swapping between Otto and a forest spirit, the latter of whom can manipulate the environment to give the former safe passage through otherwise impassable areas. Even the fights, as alluded to earlier, are more than just, “Hit the thing until either they’re dead, or you’re dead.”  Every golem has a rage meter that ticks down as the battle progresses.  If it hits zero, they begin to become progressively more enraged, changing up their attack patterns, raining hellfire from the sky, and gradually charring the battlefield until Otto meets the same fate.  This encourages players to take risks and dive head-first into every fight, as while early enemies simply get a bit tougher as the battle rages on, later ones get borderline impossible.

To supplement this, letter grades are assigned at the end of each fight, based on how long it went, how much damage Otto took, and how many Guardians were lost.  In the early missions, I was getting As, and even Ss.  By the end, I was closer to the D range.  However, it once again encourages you to learn the combat system and optimize your strategy, particularly since higher letter grades earn Otto more XP, which in turn provides more skill points for unlocking new abilities for him and his Guardians.  Plus, these battle ratings are aggregated with some other metrics into an overall rating for each level, encouraging you to return and perfect your technique. Masters of Anima is a highly polished, thoroughly enjoyable experience.  While the story can feel terribly cliché, exploration can be time-consuming due to the lack of a map, and there are a couple of odd design decisions (why can’t you take your upgrades from later levels into earlier ones when replaying them?), there’s just so much to love about the rest of the experience.  I think it speaks volumes that, despite regularly feeling like I was playing extremely poorly, I was still having a great time.  Plus, with a fairly lengthy campaign (at least ten levels, each of which took anywhere between 20 and 90 minutes), as well as side objectives for each mission, there’s a lot to keep players engaged for hours.  I’ve never commanded Pikmin, and I’ve never been an Overlord, but I’m loving the chance to be a Master of Anima.