On paper, Assault Gunners: HD Edition seems like the perfect game for me.  Featuring a deep customisation system, fast-paced mech combat, and the Dynasty Warriors-esque satisfaction of mowing through hordes of opponents at the drop of a hat, it’s pretty much my personal power fantasy come to life.

Here comes the “but”.

But that makes it even more frustrating that Assault Gunners is thoroughly mediocre in every aspect, featuring repetitive gameplay, bland visuals and voice acting, and a story that wouldn’t feel out of place in a Michael Bay film.  There’s a bit of fun to be had if you’re willing to look, but the most enjoyment for me was when I got the game’s platinum trophy and felt confident in putting it down for an indefinite time.

Each level in Assault Gunners starts with an opening crawl of text to give some background on the upcoming fight.  It seems there are some sort of worker robots called ANTS, and they’re suddenly revolting and attacking people.  As a member of an elite squad known as DAT, you go in to quell the uprising, only to discover a mysterious autonomous mech by the name of Ghost not only appears to be involved, but is more than happy to try and stop you in your mission.

If you thought that synopsis seemed like an afterthought, it’s because the plot as a whole does.  There are a handful of brief in-engine cutscenes that are used to introduce bosses and the like, but most of the story is told via text scrolls and dialogue during missions.  However, much of the in-mission chatter is in Japanese with no subtitles available.  Plus, the fragmented, mission-based structure of the game means that nothing feels cohesive, removing any sense of build-up.  It got to the point where, upon entering the final level and being met with text amounting to, “It’s the final showdown,” I did a double-take and had to remind myself that there was – in fact – a plot that was coming to its climax.

I could forgive the basic premise if the gameplay was engaging, yet it’s anything but.  Once you’ve played through the first handful of levels, you’ve pretty much seen it all.  The game attempts to shake things up by throwing in different mission objectives: e.g. eliminate all enemies, defeat a boss, capture points, etc.  However, every mission feels the same regardless of objective, meaning you’ll frequently be pausing to find out what you’re actually supposed to be doing.  In most cases, I didn’t even bother with this; usually it was prudent to just shoot everything and wait for something to happen.

On top of that, the missions are an absolute breeze on the Normal difficulty.  Basic enemies die in one hit, yet they somehow manage to be even more threatening than the bosses.  Infantry at least have strength in numbers; bosses just take a handful of good hits before dying.  I kid you not: I completed one level in nine seconds, because the only goal was to kill the boss; it’s that easy. Of course, the solution to a lack of challenge would be to turn the difficulty level up, right?  Many of those same bosses that were a walk in the park on Normal were absolutely kicking my ass on Very Hard.  The thing is: there’s no reason to do this.  Most, if not all the game’s unlockables can be obtained by playing through on any difficulty, and at the very least, getting a platinum trophy doesn’t require you to touch the higher settings.  There aren’t even any online leaderboards (a glaring omission, giving the scoring system that’s used for each level), so you don’t even have the option of seeing how you stack up compared to other players on different difficulties.

Speaking of multiplayer, Assault Gunners feels like it’s practically begging for it, thanks to the bevy of customisation options at your disposal.  Mechs can quite literally be built from the ground up, with unlockable legs, bodies, weapons, and abilities that enable you to create your dream fighting machine.  Additionally, parts can be upgraded with in-game currency to increase health, mobility, shields, and so on.  The notion of being able to take these varied creations into co-op missions a la Warframe is an enticing one, but that option most definitely isn’t present here.  Instead, once you find a setup that works, there’s essentially no reason to change it up.  Laser weapons in particular are fantastic at taking out multiple foes simultaneously, and upon learning this, I solely focused on buffing my mech’s health and shields until it was a nigh-unstoppable beast.

The game attempts to compensate for this by giving you three AI-controlled squadmates that can be brought into missions, each of which have their own mech loadout.  However, once again, the need for individual customisation is completely lost once you realise that there’s no reason not to just equip everyone with the same loadout you’re using; in all likelihood, it’s your most powerful one, and then you only need to upgrade one set of parts.  It’s not like there are special parts to fulfill certain roles (e.g. a “weapon” that heals allies, one that creates shields, etc.); it’s literally just, “Build the biggest stick that can smash the most things at once.” 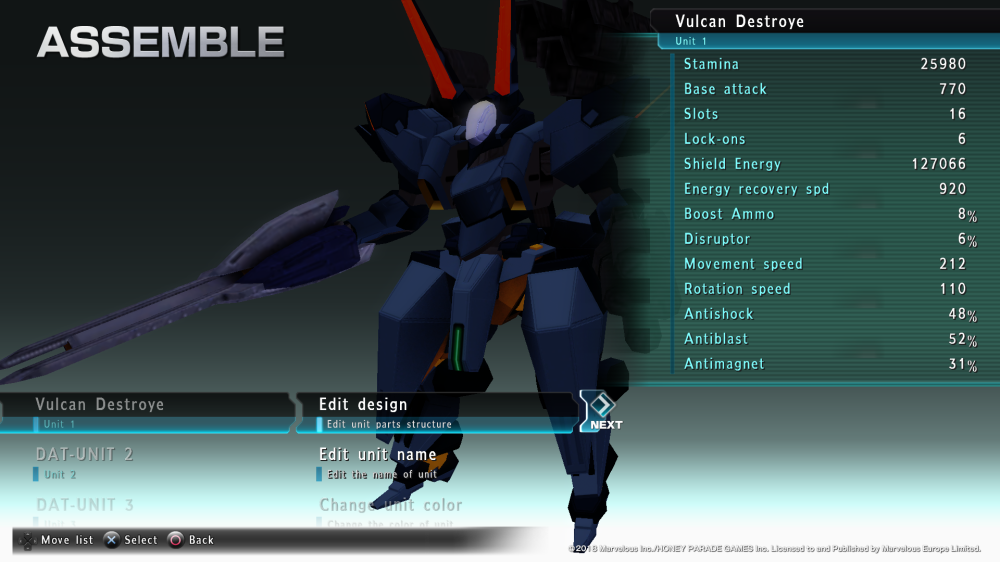 Despite being able to equip multiple weapons to your mech, you may have noticed that I said “stick”, as in a singular stick.  That was intentional, as the game makes no attempts to give you options during combat.  Each of the face buttons is used to switch to a different weapon, and you can only use one at a time.  That includes melee attacks, which are dinky little punches at the best of times, and definitely not worth switching to for exclusive use.  Thus, you’re usually just better off sticking with your primary weapon until it runs out of ammo, making an ear-splitting grinding noise when it does to make extra sure you know.  Perhaps this limited combat is a carryover from the game’s origin on the PS Vita, but it makes it so the only interesting mechanic is that your shields also power your mech’s speed boost ability; hardly a game-defining feature.

Speaking of the Vita, Assault Gunners is, as the name suggests, a port of a game originally released on Sony’s handheld, and it shows.  Environments are incredibly simplistic and frequently feature obviously repeated textures and invisible walls.  Enemies simply appear in front of you when they spawn.  While the game runs at 60 FPS on console, you can expect that to take a steady nosedive as soon as there are a lot of enemies on-screen.  Similarly, the music and voice acting start out alright, but were quickly begging to be muted, with the latter boasting some mind-numbingly grating performances.

Assault Gunners: HD Edition is short, and most definitely not sweet.  It took me less than six hours to get the game’s platinum trophy, and I don’t recall moving beyond a “I guess I’m not bored…?” state that entire time.  I certainly fell below that line frequently, with extra missions boasting vague unlock conditions like, “Complete mission 29”, only to actually mean, “Completely ignore the objective in mission 29 until the game tells you to do something else.”  It’s a shame too, as the mech customisation systems are robust enough that I wanted there to be a reason for me to return.  With that being the only thing going for it, though, I really can’t recommend Assault Gunners: HD Edition; if you love building mechs, you can probably get a cheap Gundam model for around the same price.