That was my first reaction upon receiving a press email about de Blob 2’s release on current-gen consoles.  The inaugural title was a Wii exclusive which – while attention-grabbing to my 13-year-old mind at the time – ended up becoming little more than another bargain basement platformer in the Wii’s sea of them.  Hell, I was pleasantly surprised when it got a multiplatform sequel in 2011.  Yet when not a peep was heard about the franchise afterwards (following publisher THQ’s closure in 2013), I had pretty much accepted that it was all over for Blob and friends.

Colour me surprised then, when the first game showed up on modern consoles last year, with the follow-up close on its heels.  Of course, one must wonder whether time’s been kind to the crew.  The answer?  Well, it’s complicated. For the uninitiated, de Blob 2 places you in the shoes (puddles?) of the titular Blob on his quest to liberate the citizens of Prisma City from the colourless rule of Comrade Black and the INKT Corporation.  See, Black and co. aren’t fans of colour, and have decided to take it upon themselves to remove all of it from the city, turning into a lifeless field of gray in the process.  Additionally, they’ve started turning civilians into crazed cultists who are more than willing to aid the INKT forces in their campaign against chroma.  The only thing standing in their way is Blob and his friends in the resistance group known as the Color Underground.

I’ll admit it: de Blob 2 surprised me with its story.  The child-friendly artwork belies a narrative that deals with all manner of heavy themes: forced indoctrination into religious cults, election rigging (and other political machinations), and revolution, to name a few.  This is balanced out by the light-hearted shenanigans of Comrade Black and the Inkies; think of the Despicable Me minions, except they actually – you know – have character and do things relevant to the plot.  The communication of characters is also limited to gibberish mumblings and wild body language, ensuring that levity is frequently provided thanks to goofy physical comedy. Gameplay in de Blob 2 involves painting, and lots of it.  Don’t worry if you’re lacking art skills, though; simply touching a paintable object while Blob is coloured will coat the entire structure in your current hue.  Mixing and matching the primary colours (red, blue, and yellow) will allow you to create secondary colours (green, purple, and orange), and combining all three will give you brown.  You’re free to use whichever you choose, though several main and side quests in each level require you to paint buildings with certain colours.  Thankfully, the required pigments are generally nearby, and a compass can be pulled up with the press of a button to guide you to the closest ones, as well as to your objective.

Aside from 3D platforming around the open levels of Prisma City, de Blob 2 features 2D segments when you go underground, and a surprisingly expansive combat system.  While the latter starts out with simply splatting Inky grunts, it evolves to incorporate foes that must be attacked at specific times, as well as those that can only be defeated when Blob is a certain colour. Unfortunately, while the enemy diversity is great, it also brings up a major issue with de Blob 2’s combat: lock-on targeting is borderline useless.  A brief tutorial in one of the earlier levels teaches you how to use it: simply move the right control stick while targeting an enemy to swap between targets.  However, outside of that tutorial, I think I got the lock-on switching to work once.  Thus, combat generally comes down to holding the lock-on button and spamming your attacks (you automatically target a new enemy when your current mark dies) before anyone has time to react.

Thankfully, that lock-on is rarely used in the rest of the game.  de Blob 2 feels like it’s designed for chilling out; early levels pretty much let you roam around, paint buildings, liberate civilians, and seek out a myriad of collectibles – some of which are used to upgrade Blob’s abilities – and hidden objects.  What sucks is that it only feels designed to be that way.  This Zen-like vibe is all but destroyed thanks to a timer placed on each level.  Completing objectives will reward you with more time, but it’s usually a mere 30 seconds to a minute.  Granted, the timer disappears when you complete all the main level objectives, but then you have to backtrack through the entire map to finish everything you skipped over earlier.  Thus, you have a choice: power through the main objectives and ignore the hidden collectibles around every corner that are begging for your attention, or try do as much as possible on the fly before inevitably running out of time and restarting from the last checkpoint. Suppose you’re like me, though, and you notice your lack of time while you still have a few minutes to spare.  All I can say is this: if you try to rush in de Blob 2, you’re going to have an awful time.  Blob’s movement is loose and floaty, much like one might expect of a sentient ball of paint.  While this is fine for casual platforming action, it means that you’ll find yourself constantly missing jumps and sliding off ledges when you least expect it.  Certain sections required several retries to complete, almost solely due to the lacklustre level of control you have; by the time I actually made it through, I was out of time and had to do them all over again.

At the very least, de Blob 2 excels in the style department.  Everything about it has an overwhelmingly funky vibe, from its graffiti-esque aesthetic to its locales that go from fifty shades of gray to a veritable cornucopia of colours.  Perhaps best of all, the sound design is expertly crafted to make painting the city an even more engaging experience: each object you paint adds a brief instrumental accent to the soundtrack.  The instrument added varies with colour, and it’s not unlikely that you’ll find yourself seeking out certain colours solely to add more of their sound to the score; personally, I couldn’t get enough of the record-scratch sounds of brown. 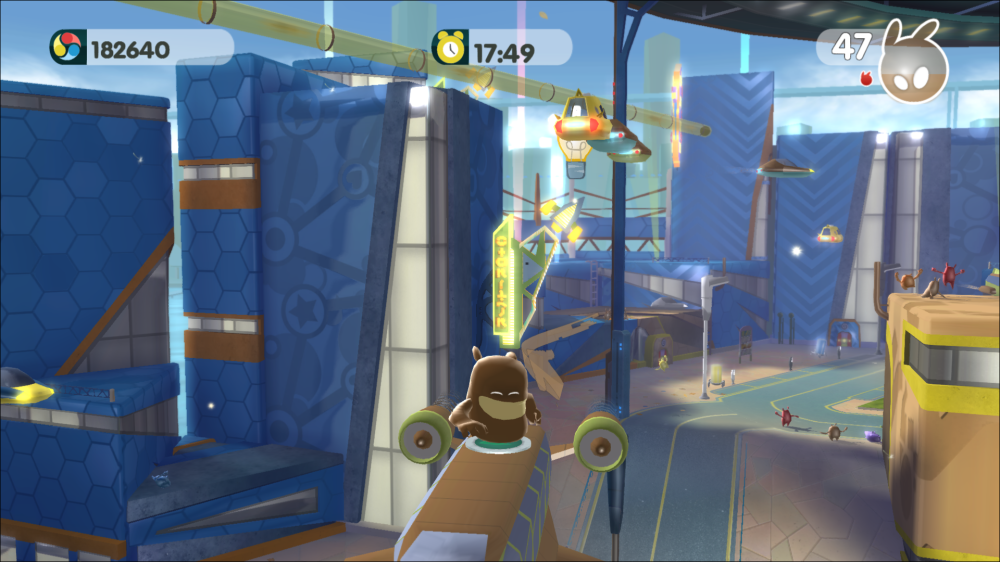 Now, this all seems pretty good so far, right?  It’s not without problems, but I think I’ve mostly painted de Blob 2 as the engaging, light-hearted experience it wants to be.  Unfortunately, this may just be one of the worst ports of a game I’ve ever seen.  Keep in mind: this came out on last-generation consoles – i.e. Xbox 360, PS3, and Wii – seven years ago.  In that time, one would hope some advancements were made, right?  Well, prepare to have your hopes dashed.  Visually, de Blob 2 looks effectively identical to its last-gen counterparts, save for the fact that the older versions seem to have more blur and fog placed on distant objects.  Even if this is the case, the draw distance in the 2018 release of de Blob 2 is still atrocious, suffering from near-constant pop-in; try spotting collectibles from afar when they literally won’t show up until you’re within a few metres of them.

Here’s the kicker: in the seven years since de Blob 2’s initial release on far weaker hardware, the game’s framerate has gotten worse.  In the first handful of levels, the stuttering was annoying, but bearable.  I was irritated that a game that looked effectively identical to its original incarnation wasn’t running at any sort of locked framerate, but I could deal with it.  Then this happened:

You may be thinking, “Well, why do you say the framerate’s gotten worse?  Maybe the game was borderline unplayable on last-gen consoles?”  Think again.  As it happens, I own the Xbox 360 version of de Blob 2, so I loaded it up out of curiosity.  60 FPS.  Locked.  Granted, this is based solely off my eyes due to my lack of a framerate monitor for the 360.  However, even if there was some stuttering, there were definitely no noticeable drops below 30 FPS.

Not only was the abhorrent framerate frequently painful to look at, it made the already-imprecise platforming borderline impossible at times.  That video above?  Yeah, that’s one of the last things I did in de Blob 2.  I didn’t beat the game, because there was no way I was putting up with that horrific stuttering for the entirety of a level (and possibly the rest after). 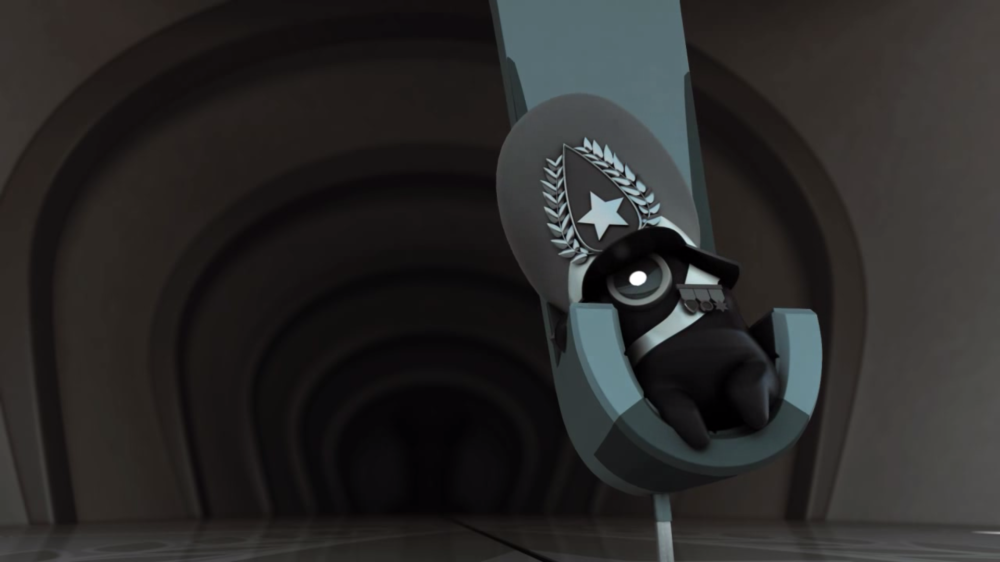 de Blob 2 is a pleasant game that’s been demolished by a slapdash port.  Considering the Xbox 360 version can be picked up for around $10 on eBay (compared to the $40 tag on this release), it makes the whole thing stink even more of a cheap cash-in.  Maybe the game runs better on Xbox One and/or PC.  Maybe it’ll get a patch at some point that fixes these glaring technical problems.  In the meantime, get some paint and a canvas to satisfy your painting craving.  It’s likely cheaper, actually has a stable framerate, and is only a complete mess if you want it to be.