Believe it or not, the PlayStation 4 celebrated its 4th birthday last year, which meant Killzone Shadow Fall – a launch title for the console – did as well.  The hype has come and gone.  Guerrilla Games went on to create Horizon: Zero Dawn: a game that is not only widely considered better than Shadow Fall, but was hailed as one of the best titles of 2017.  Yet here I am, writing about this practically ancient game as though anyone still cares what some pundit thinks about Shadow Fall at this point.  Then again, there are still people playing its multiplayer, so obviously there’s some interest in the title.  Plus, I just got a PS4, and this was one of the titles I traded my pack-in copy of Star Wars Battlefront II for.  Sue me for having an urge to talk about it.

Let me put it bluntly: Killzone Shadow Fall feels like the PS4 launch title it is.  Pretty much every feature of the PS4 controller is utilized to some extent.  Swiping on the touchpad changes the mode of your OWL companion, which isn’t bad, but feels like it could have been done in a far more straightforward manner.  The light bar on the controller changes colour depending on your health, which feels like little more than a gimmick; unless you’re playing with your controller right in front of your face, chances are you’ll be too focused on the on-screen action to pay it any mind.  Lastly, audio logs play out of the controller speaker, which is by far the best feature.  It’s intuitive, clever, and does a good job of separating the audio from the action so you don’t have to stand in place while listening to people blather on about their history. 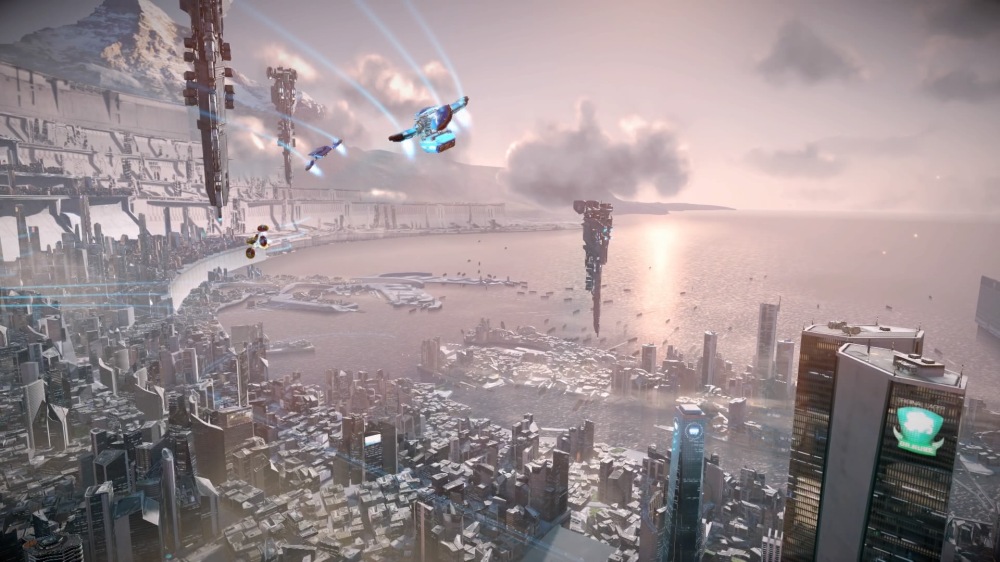 Of course, the other place where Shadow Fall feels like a launch title is in its visuals.  Pretty much every level seems to feature some sort of massive set piece, whether it’s showing off particle and physics systems, rendering fancy explosions, or just displaying a sprawling vista.  Surprisingly, it all holds up quite well.  Remember the Xbox 360 launch titles, and how poorly their graphics held up four years down the road?  Hell, remember the visual fidelity leap between series entries for Gears of War and Halo?  That’s far less pronounced here.

Obviously, when one gets right down to the technical details of it all, games released today are probably pushing more polygons than any of the PS4 launch titles; that doesn’t mean Shadow Fall looks unimpressive.  Glistening cityscapes had me mashing the screenshot button, while the intimidating armour of the Helghast has never looked prettier.  That is, when it’s not obscured by squint-worthy lens flare.  This isn’t Syndicate levels of awful, but it’s incredibly frustrating to see the exquisite detail of a game world blotted out by excessive sunlight.

Still on the technical side of things, the animations have suffered a bit more than the graphical fidelity.  They’re not bad by any stretch, but certainly look more rigid in places than what one can find in Horizon.  Plus, there were a couple moments of bugged lip-syncing, though nothing severe.  The audio balancing, though, borders on atrocious.  Even with the music and sound effect volumes lowered and the voice volume maxed, I was frequently straining to hear what characters were saying.  Then, as soon as I turned the master volume up, an explosion would go off and nearly blow out my eardrums.  As someone who dislikes using subtitles, it was frustrating to feel forced into enabling them. 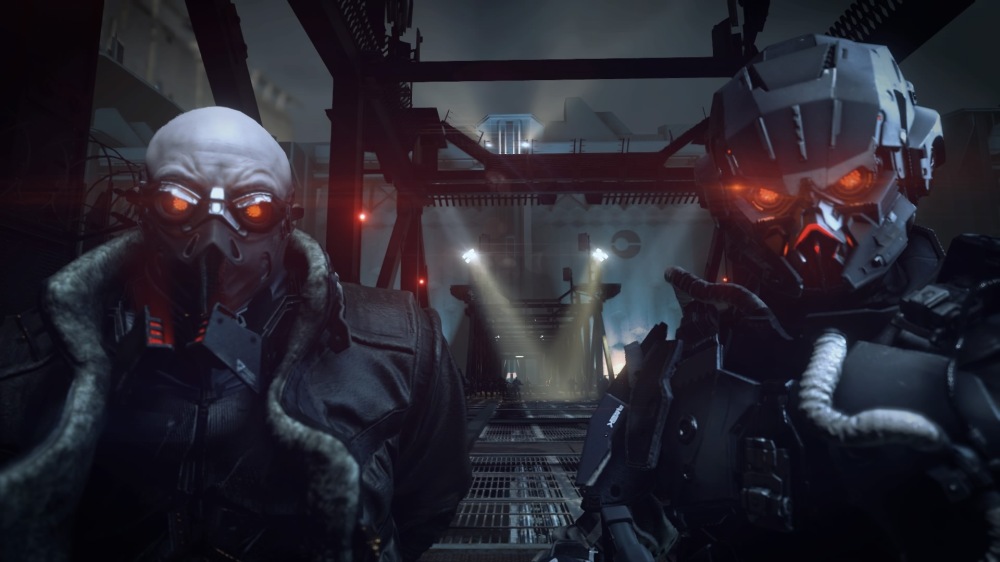 At least it didn’t really matter what the characters were saying.  Now, I’m the kind of person who’ll care about seeing a story through to the end, even if I can barely remember anyone’s name.  Really, though, Shadow Fall’s campaign is so painfully average that most of the names and places getting thrown around simply blend into one meaningless mass of uninteresting plot.  Lucas Kellan – the protagonist – is perfectly characterized; you never see his face, and he has just as much personality.  He eventually teams up with a Helghast assassin named Echo; she’s got a sniper rifle and a really cool hood, so she’s automatically a better character than Kellan.  The basic plot centres around Kellan’s moral tug-of-war as he must choose whether to follow Echo or stick to the orders of Sinclair, his superior.  Unfortunately, it’s incredibly obvious how things will progress.  Sinclair’s a man with a one-track mind, hell-bent on crushing Helghast insurgency.  If you don’t foresee his eventual betrayal by the time the first few missions are done, well, I guess now you will.

To Shadow Fall’s credit, it does do some interesting things with the narrative.  I was caught a bit off-guard by the fact that Sinclair’s “betrayal” actually takes the form of Kellan betraying Sinclair and Sinclair sticking to his ideals.  What really got me was the ending, in which Sinclair literally knocks Kellan down, briefly monologues, and then shoots him.  I had predicted that the plot would go down the standard “once-beloved superior goes crazy, and his apprentice is forced to take him out” path, so ending Kellan’s story on that note was a nice touch.  It was made even more poignant by the fact that the opening mission features Kellan (as a child) being rescued from Helghast forces by Sinclair after Kellan’s father is shot; Sinclair ends up being both Kellan’s saviour, and his downfall.

Best of all, there’s a nice little fake out where, shortly after the credits start rolling, you get to play a bonus mission as Echo.  This brief challenge involves three simple tasks: collect your sniper rifle, disable the security systems, and shoot Sinclair to avenge Kellan.  Of course, Kellan’s such a white-bread cardboard cut-out of a character that it would mean more if Echo was avenging her pet rock, but it’s still a fun diversion.

That mission with Echo is also a nice change of pace, because it’s far more stealth-focused than the rest of the game.  Equipped with a cloaking system and silenced pistol, Echo is a lot more fragile than Kellan, and I found that the best way to complete her level was simply to activate the cloak and sneak through everything.  On the other hand, the rest of the game can’t seem to figure out whether it wants to be a stealth game or a guns-blazing action shooter.  Kellan has access to a motion-sensor-like device that allows him to track nearby enemies, even through walls.  He can also do silent takedowns from behind or above, and – upon performing these finishers – can toss out a knife that’ll magically curve through the air and peg a second nearby foe in the head.  This makes a lot of the levels feel like they were tailor-made for stealth runs.

There’s only one problem: pretty much everything else Kellan can do will alert seemingly everyone in a 20-plus metre radius.  Fire off a gun?  Everyone knows where you are, even if it seemed like it would be a silenced weapon.  Enemy turns around a literal half-second before you snap their neck?  Prepare to be filled with lead.  Enemies can even stumble upon the corpses you leave behind (though there’s bewilderingly no way to hide them), and will instantly go on high alert and converge on your position.  Maybe it was just because I played on the hardest difficulty, but the AI was so incredibly unforgiving that half the time it seemed like they knew my location before I was even detected.  Plus, there are no real options to disappear or play stealthily, save for barricading yourself in a room and picking off each foe as they wander in.

I’d be fine with this, but so many parts of the game feel like they were designed with stealth runs in mind.  You can sneak around and stab foes to thin enemy ranks before you’re inevitably spotted.  Security cameras can be hacked or otherwise shut down to disable alarms.  It ends up feeling like Guerrilla set out to make the next Deus Ex, only to scrap that idea and jury-rig everything for a blockbuster shooter in time for the PS4’s launch. 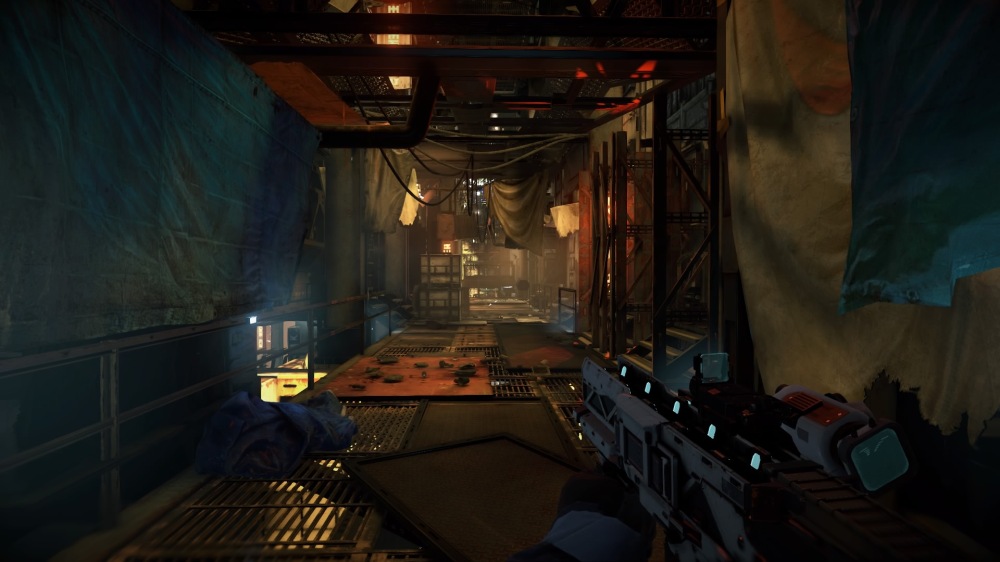 This “last-minute changes” tone permeates much of the experience.  The OWL – a robotic companion that assists Kellan – can attack enemies, deploy a shield, shock foes and overload their shields, and throw out a zipline to allow Kellan to rappel down to lower ground.  However, the latter has such a poor range in most scenarios that it’s rarely used; I literally forgot it was an option until the game put me in a situation that required it.  How you’re supposed to get the trophy for shooting five or six guys while ziplining is beyond me; most rides are over before you can even kill one.

The guns are also incredibly poorly identified.  They do manage to feel distinct, with different weaponry feeling better suited to different playstyles.  However, it’s extremely difficult to tell most of them apart based on their silhouettes (especially in the heat of the moment), and their naming conventions further complicate things.  For instance, several weapons in the game are named “Keyzer”, preceded or followed by some differing numbers and letters.  Each one has distinctions, whether it’s the type of scope it uses, what kind of secondary fire option it has, or if it even has a secondary fire.  However, there’s no good way to tell them apart, least of all when you’re scrambling to cover and want to see if you can grab something useful on your way.  Games like Halo force you to establish a “weapon vocabulary” – by the end, you can identify a Magnum from 10 feet away, and pretty much pick up weapons as needed while fighting.  In here, everything (save for a couple of “super weapons” like RPGs and sniper rifles) are little more than black blobs that mean nothing until you pick them up.

I didn’t dislike Killzone Shadow Fall.  It’s got some gorgeous visuals, a solid soundtrack, and a multiplayer mode that, while not really my jam, gets kudos for providing all its maps for free.  However, my overwhelming sentiment towards the campaign while playing was one of relative indifference, and that hasn’t changed in the slightest since finishing it.  Maybe I’m just burnt out on FPS campaigns; even some of the highly praised ones in recent memory (Wolfenstein: The New Order comes to mind) left me feeling like everyone knew something I didn’t.  Whatever the case, Killzone Shadow Fall is, as I said at the start of this, a quintessential launch title.  It showcases the gimmicky tech and powerful hardware of the system it runs on.  It provides a bombastic narrative full of massive set pieces that gives the console’s creator something nice to show off in advertisements.  It’s also a vapid, inoffensive experience whose overall quality is eclipsed even by the last-gen games it attempts to make obsolete.