Full disclosure: it is entirely possible that playing ABZÛ was very much a case of “right place, right time”, where this particular point in my life was the perfect moment for me to experience it.  Certainly, having a pleasant, zen-like gaming experience is not something that I’m opposed to at the moment.  With that out of the way, ABZÛ is one of the most wonderful video game experiences that I have ever had the pleasure of being immersed (heh…heh heh) in.

While presentation is something that I normally don’t discuss until the end of a review, I feel that with ABZÛ it takes centre stage, and should be treated as such.  The first time I started the game, I played it for about half an hour straight, and I don’t know if my jaw left the floor the entire time.  ABZÛ is simply stunning, and perfect evidence that you don’t need multi-million dollar graphics technologies and 8K textures to make a gorgeous work of art.  Environments are bright and colourful, with various distinct palettes being used to give each area its own unique feel.

Similarly, the flora and fauna have an astounding amount of variety.  While there appears to be little, if any model variation within a particular species, the ways in which they are used on-screen made it so the similarities were never apparent to me.  Similar fish form schools and swim around.  Predators hunt and consume prey.  There are even octopi, wiggling around near ancient pottery and shyly ducking inside as you swim past.  Each critter moves so naturally and fluidly that you can’t help but be absorbed into the world they inhabit; likewise with the diver you control. 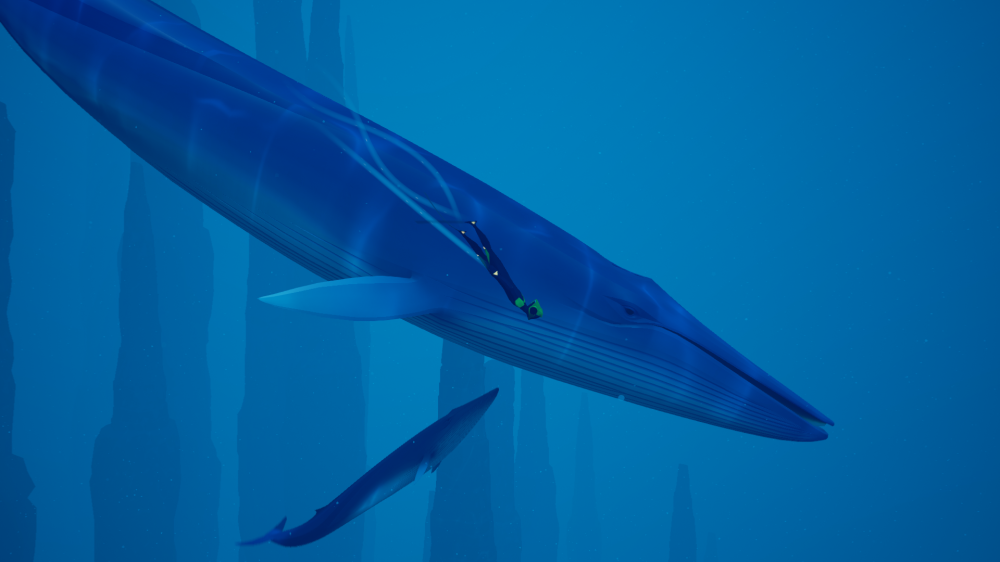 And the colours; oh my word, the colours.  Vibrant reds, greens, blues, and everything in between go flitting by as you swim through the ocean.  I found it sort of amazing that the game managed to feel so coherent in light of this overwhelming diversity.  Yet, instead of forming a visual cacophony, the beautiful rainbows of fish form a symphony, delicately going about their lives while creating a gorgeous work of art with every frame.  They make ABZÛ’s world feel more vibrant and alive than countless other games before and after it.  Despite the cliché, this truly is a game that is best seen in motion, and not just because many of the in-game screenshots have a frustrating amount of motion blur on them by default.  There were a couple of times where some truly busy scenes caused a surprising drop in performance, but they were fleeting, and more of a curious anomaly than an active hindrance to the experience.

As a result of the visual splendor on display, the audio side of things has a lot to live up to.  Thankfully, it does so with flying colours.  Austin Wintory’s score swirls through the soundscape like a school of fish, its whimsical orchestral compositions reinforcing the game’s ethereal atmosphere.  It gives life to an already lively environment, sounding like something that would not be out of place on the Fantasia soundtrack.  I consider it a testament to its quality that the game feels so empty without it.  A handful of areas get rid of the music, replacing it with the quiet bubbling of the water and the movements of sea creatures, and the result is a truly bleak experience.  The life of the ocean is sucked away as the colours fade to slate grays, yet the sequences manage to feel sobering rather than boring or off-key.  They had me longing to return to the colourful, busy locales that I had previously visited, and I felt a wave of relief once I was able to do so.  Through its music and visuals, ABZÛ masterfully modulates its tone, providing a varied emotional experience that never gets dull. I’ll be up front about it: I can see where some would claim that ABZÛ “isn’t a real game”.  Its core gameplay loop consists of swimming through various underwater locales and playing what amounts to a hidden object game.  There’s an assortment of “puzzles”, but they can barely be considered as such.  Each effectively comes down to, “activate a couple of switches to open this door”.  Not exactly stimulating stuff in and of itself.  However, none of this ended up mattering to me as I played; the game was just such a joy in every other aspect that it didn’t feel like it needed in-depth mechanics and complex systems.

At first, I didn’t think there was a story to ABZÛ.  The game starts with your adorable diver floating in the middle of a vast ocean.  You have no idea how you got there, what you’re doing, or why you’re doing it.  So you swim.  And you explore.  And as you do so, the game gradually peels back the details of its world.  It weaves a relatively simplistic and somewhat vague narrative into its environments, using what seems to be the art of an ancient civilization to give you hints at what came before.  Personally, I loved it.  It gave just enough for me to be able to make connections and have sudden revelations, but not at the cost of being overly complex or drawn out.  It also left just enough room for interpretation that I found myself thinking about it and wanting more even after the credits rolled.

Aside from swimming between set pieces, there is an array of hidden artifacts to find.  Seeking out broken robot drones is mandatory, as they are able to open up new pathways for you to explore.  However, the rest are optional. Meditation statues can be found in some of the larger areas, and allow you to perch yourself on them and meditate, which locks your camera onto a particular fish to follow it through the environment.  It’s a nice way to identify the various species in an area, and can also be helpful for scoping out collectibles.  However, the controls for it can be a bit annoying, as there’s no good way to lock onto a specific fish, and sometimes the game will get caught up in a school and keep locking onto the same species over and over.  Honestly, though, this didn’t really bother me, as I found meditation to be little more than a glorified screensaver option; it’s far more satisfying to go swimming with the wildlife than to watch them.

There are also hidden pools that allow you to release new species of fish into the environment.  To my dismay, I found that these often seemed to be large-ish carnivores that proceeded to take advantage of the veritable buffet before them.  However, it’s still a nice way to further diversify the game’s locales.

Lastly, collectible shells are hidden around, though they don’t seem to serve any purpose beyond earning you an achievement for finding them all.  Despite this, I still feel a desire to go back through the game to hunt them down, so I can’t really complain about their inclusion.

While exploring the environments, you can also “ride” pretty much any fish that’s your size or larger, ranging from sea turtles to humpback whales.  By holding one of the controller triggers while near one, your diver gently moves over and grabs onto them.  Then, you’re free to explore with your new friend to your heart’s content.  This isn’t all that useful for navigating the environments, as you have a fairly limited amount of control over the creature’s movement.  However, I still enjoyed doing it, just to experience the joy of gently drifting through the water alongside a massive sea creature. I can’t think of enough praiseworthy adjectives to layer onto ABZÛ.  ABZÛ is magical.  It’s stunning.  It’s beautiful and breathtaking and relaxing, and one of the most singularly joyous gaming experiences I’ve ever had.  I’m not exaggerating when I say that I had a smile on my face through nearly the entire experience.  Hell, this is a game that made me love a great white shark, and that’s saying something.  It’s a small, brief journey that manages to feel vast and varied throughout.  The minor technical issues I experienced barely registered in the grand scheme of things.  However, I do highly recommend you venture to the Steam forums to get tips on turning off the motion blur, if only for the sake of taking screenshots.  Regardless, it’s a game that I loved every second of, and have no qualms about recommending to anyone looking for a gorgeously tranquil way to wind down after a long day.  At the very least, it’s one that I can’t wait to dive into once again.

Also, it has manatees in it, you can ride them, and they’re freaking adorable.