Played With: Mouse & Keyboard and Steam Controller (about 50/50)

Simplicity in design is something that can be truly magical for games.  Sure, it’s possible to keep things fresh with complex, deep mechanics and ever-changing rulesets.  However, experiences that are equally enjoyable (or sometimes moreso) can often come from games that focus on a single idea and do it extremely well.  Reigns is a perfect example of this philosophy; the gameplay amounts to little more than “rule a kingdom via Tinder”, yet it still manages to be engaging and intriguing through much of its duration.

Upon first starting Reigns, you are greeted by a ghost, who asks if you are “the young king”.  This immediately introduces you to Reigns’ core mechanic, which involves swiping cards off the top of a deck to make decisions.  Swiping one way in this case answers “yes”, while the other answers “no”.  Then, the next card in the deck is flipped, and another quandary comes your way.  Some decisions will bring new characters to your kingdom, often adding new cards to the deck, which get shuffled in for future rounds.  You continue in this way, making decisions as the head of a medieval nation, before your reign inevitably meets its end.

All the while, you are forced to balance four resources: the Church, your people, the army, and your wealth.  Most decisions you make will affect one or more of these in some way, though how is left intentionally vague.  Any resource that will be affected by a decision gets either a small or large dot under it when you start to swipe a card, designating a minor or major change, respectively.  However, you don’t know HOW the resources will be affected until you actually confirm the action.  Sometimes the results can be easy to infer: choosing to build a dam to stop flooding will lower your wealth while raising the respect of your people.  Others are significantly more nebulous; just what will eating that blue mushroom actually do? 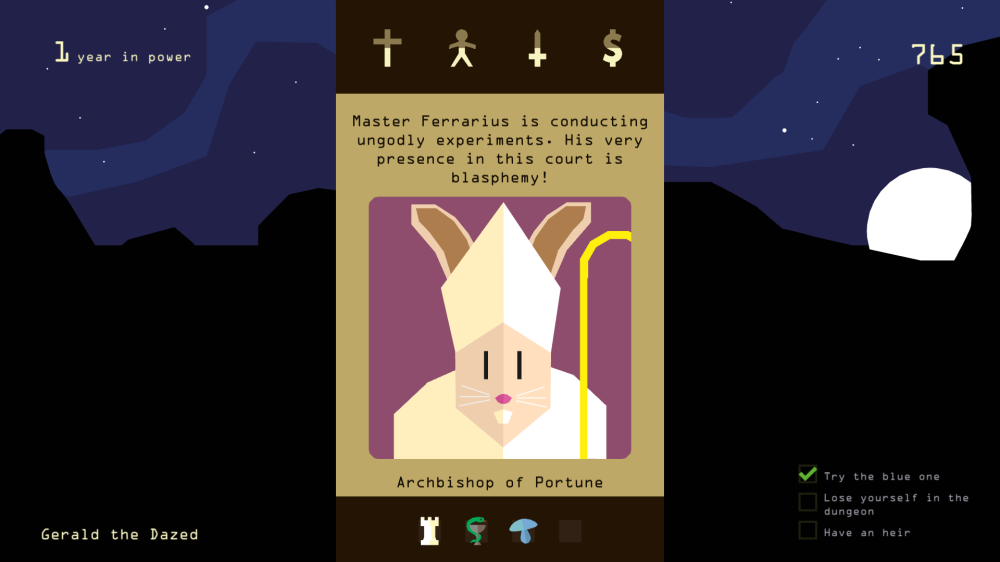 Things get further complicated by the fact that certain actions will carry forward, either within the round or between them.  Making the “right” decision will sometimes provide you with “power-ups” of sorts that carry on between rounds until they are used up; an example is a barn to provide emergency food to your population.  Sometimes the desire for these advantages can even motivate you to deliberately throw a round to prepare for the future.  There was one instance where I allowed my country to go bankrupt just so that I could build a barn for future generations to use.

Speaking of bankruptcy, every reign must some day come to an end, be it as a result of dissatisfaction of the population, disease, or even just old age.  In Reigns, there are a number of ways for your king to meet his unfortunate end.  The “basic” ones happen as a result of either completely depleting a resource or maxing it out.  Yeah, that’s right; you’re not safe if you make everyone happy.  Lose the support of the Church, and a pagan mob will have your head.  Make it too powerful, and it may just decide that you would make an excellent martyr.  It becomes a delicate balancing act of keeping everyone just satisfied enough to prevent things from falling into ruin.

Once it’s all over for you, it’s time for your descendant to take over to see if they can do any better.  This is where the aforementioned “power-ups” come into play, as they basically act as an inheritance for your heir.  Having things play out like this also adds a nice little wrinkle to things, as it sometimes lets you play as the “bad guy”.  Case in point: in one round, my son basically stole my kingdom out from under me.  After I was cast out of the castle, I got to play as him to see how his reign turned out.  Spoiler alert: I deliberately made it go poorly.  Jerk. 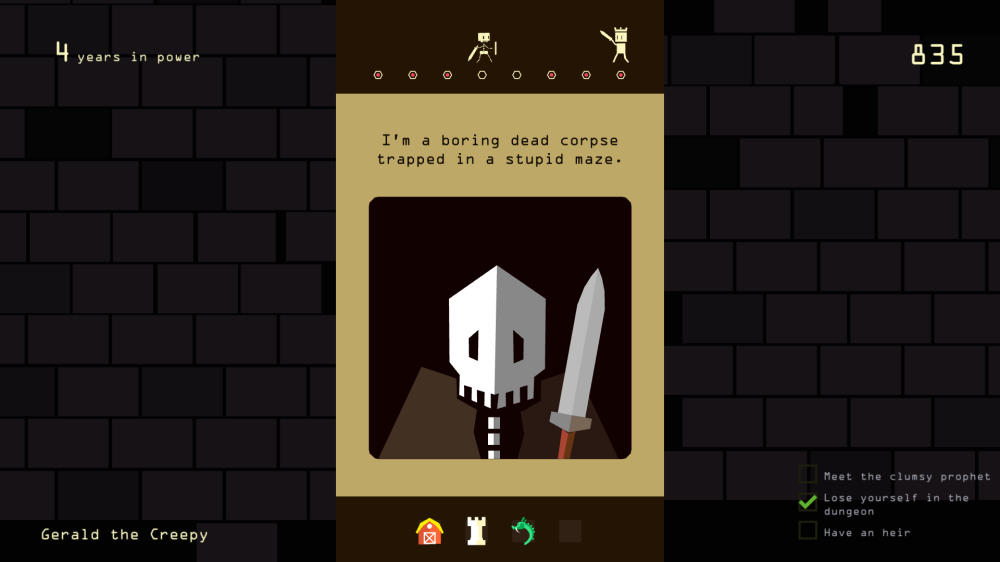 As you carry on, you get to meet a host of colourful characters, from executioners who dress up as Santa Claus to court jesters that make remarks somewhat reminiscent of a certain president.  Each one speaks only in gibberish, using vaguely Muppet-esque voices.  However, it’s charming, and fits well with the simplistic presentation, even if a few of the voices did grate a little at times.

Unfortunately, the biggest problem that I ran into with Reigns was that some of the scenarios and characters got a bit repetitive after a while.  The order of cards you get in each reign are randomized, however, there are still a number of situations that you’ll inevitably end up running into countless times.  The same can be said for the characters.  While some variety is added through different names, the same assets are used for each “class”.  As a result, every member of your military looks the same.  Each executioner looks identical to the ones before them.  It can be a bit annoying, because there’s nothing that really allows you to keep each character distinct.  Is this Santa Claus executioner the same one that’s having a morality crisis over their job?  I don’t know, and you probably won’t either.  There are some unique characters thrown in, like some visiting relatives, your dog, and some others, but there’s still a lot of repetition in the mix. 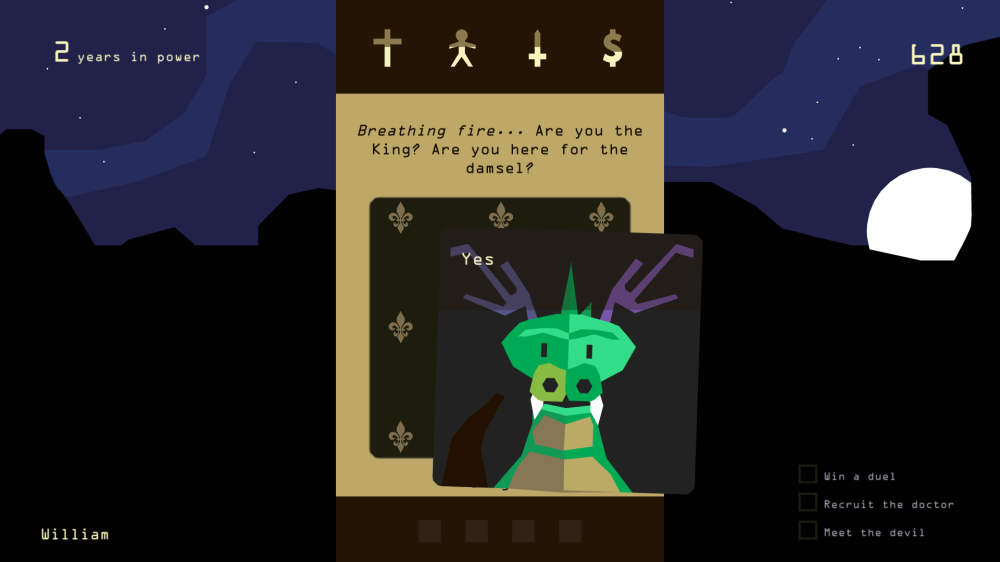 Luckily, the pacing of the game mostly makes up for this.  It’s reasonably short, and while it does seem to be slightly better suited to shorter play sessions, I still found myself getting totally hooked on it, especially the first time I played it.  Plus, new characters, items, and situations are added at a regular enough rate that you tend to gain access to new content just as what you have is starting to get stale.

Speaking of gaining access to new things, I have to throw out major props to the game for its sound design.  The music is simplistic and a bit repetitive, but pleasant enough that I never muted it.  What I loved were the sound effects, particularly those for unlocking new things and completing objectives.  Just something about the loud, triumphant clangs made me want to get up and cheer almost every time it happened.  It immediately made me excited to find out what I had managed to unlock.

As for the rest of its presentation, Reigns takes a simplistic approach to its graphics, with simple, angular character designs that are basically just clothed bodies with eyes.  However, it works well, meshing nicely with the whole card game theme that the game has.  Everything is bright and colourful, easy to understand, and lovely to look at.

On the technical side, I only ran into one odd bug: exiting the game caused it to stop responding, forcing me to close it through Windows.  Nothing major, thankfully, and it never caused me to lose progress.  Still kind of odd nonetheless. 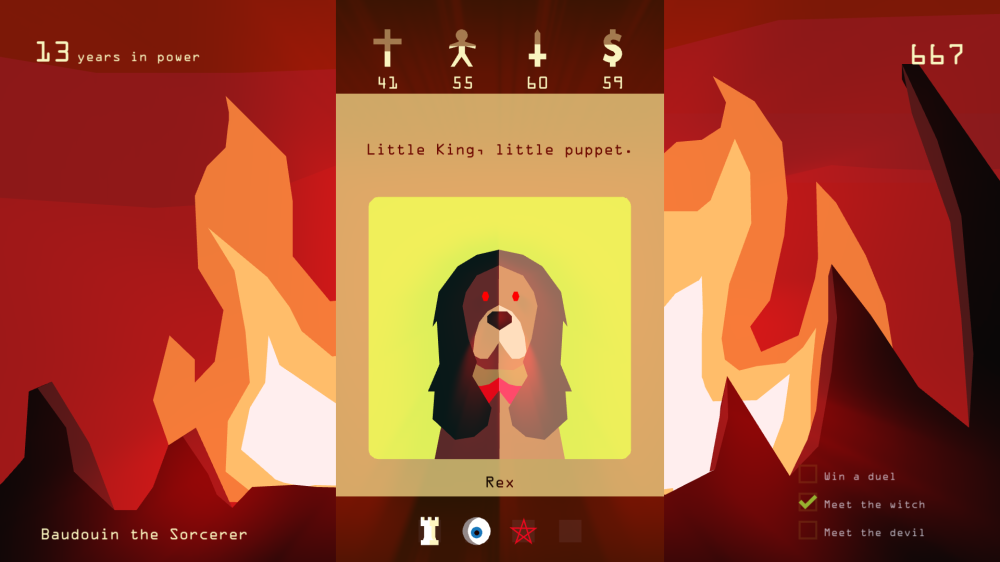 Reigns has been one of the most enjoyable gaming experiences I’ve had recently.  Every time I start to worry that I’m becoming jaded and can’t enjoy anything anymore, along comes a game like this to prove me wrong.  It marks the first time in forever that I’ve had to all but drag myself away from my computer to prevent myself from staying up late with a game.  It’s also been the first time in recent memory that I’ve had a hard time not thinking about the game when I wasn’t playing it.  It was so simple, yet had so much to offer beneath the surface, that I couldn’t help but fall in love with it.  Whether I was getting involved in duels of love, fighting off a trash-talking skeleton, or looking on as my dog got possessed by Satan, one thing was clear: it’s good to be king.