Tsundere: [noun] A Japanese term for a character development process that describes a person who is initially cold and even hostile towards another person before gradually showing a warmer side over time.

Tsundere Sharks.  The name alone got me, and it was further helped by the app icon, featuring a cute-looking shark with rosy cheeks and a sour expression.  Having flashbacks to my brief time with Hatoful Boyfriend (a pigeon-dating visual novel), I was instantly intrigued.  The store description furthered my excitement by promising the opportunity to “Find [the] best girl”, calling the game a “Super Realistic Harem-Shark Sim”.  “I am 110% okay with a shark dating game on mobile,” I thought.  I specifically postponed playing it until I was at home, thinking that it would be an amusing and entertaining experience deserving of my full attention.

I think that I maybe got a bit overhyped. 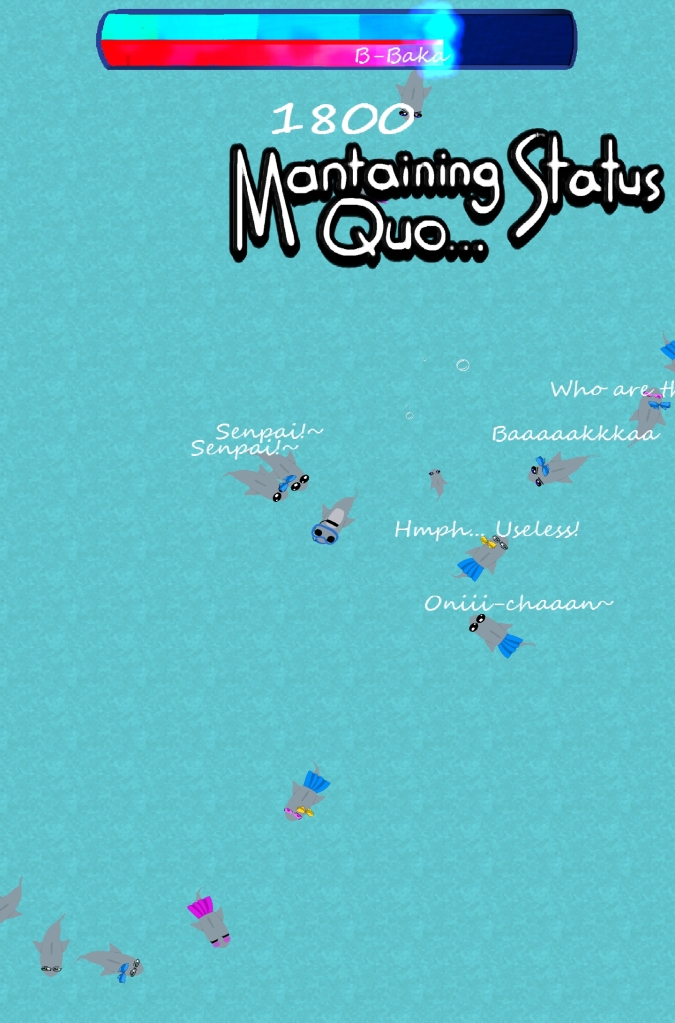 See, Tsundere Sharks isn’t a visual novel.  It doesn’t let you form any sort of relationship with any of its fishy cast, unless you count watching them smash their face into your character as the blossoming of a beautiful relationship.  Instead, it’s simply an object-avoidance game.  You tap and hold on the screen to allow your shark to swim around, and attempt to avoid a swarm of approaching sharks.  You earn points by swimming close enough to them that they catch a glimpse of you and start following you, often letting out a cry of, “B-baka!” or something similar as they do.  As soon as one of them touches you, though, it’s game over, as apparently accepting the love of one of your many shark waifus signals the end of your harem-creating days.  Speaking of harems, once you attract the attention of enough sharks, you earn the title of “Harem King”, gaining a speed boost and temporary invincibility, as you smash through hordes of adoring fangirls, earning points all the way.  Also, “best girl” sharks will periodically spawn, giving you bonus points if you can get to them and getting added to your gallery of “trophy waifus” if you let them capture you.

And that’s basically the game.  There’s a multiplayer mode, but there seem to be very few, if any players.  There’s a shop where you can buy new skins for your shark, but I didn’t find any of the outfits to be particularly remarkable or anything that I was motivated to work towards.  I’ve played the game for 17 minutes, and I feel like I’ve seen all that there is to see.

One of the main problems I ran into while playing was a problem I have with lots of action-y mobile games: my fingers.  I get that this is a problem that may vary from person to person, but I found it to be incredibly frustrating when I would try to dodge between a couple of sharks, only to get caught by a different one that I couldn’t see because my finger was in the way.  Using a stylus could potentially resolve this, but seriously, who uses one of those?  (Author’s note: I periodically use one…don’t judge me.)

The game’s presentation is also pretty unremarkable.  The best part of it is the designs of the sharks that appear on the game over screen, spouting various stereotypical tsundere-ish quotes.  However, it’s pretty clear that these all basically use the same base over and over, with different eyes and bows swapped on for variation.  Otherwise, pretty much everything looks like it’s straight out of MS Paint.  The designs of the sharks in-game are bland, with small splashes of colour marking different features; interestingly, these don’t always seem to match up with their appearance on the game over screen.  This is also why I didn’t really feel motivated to unlock any of the new player skins; none of the alternate outfit designs really stood out to me in a way that unlockables should.  The tiling on the background is clearly visible, the “best girl” sharks are literally just golden sharks, and the list goes on.

The game’s audio is also seriously lacking.  Like, literally, it’s lacking.  There’s no in-game music, and the only sound effects are a repetitive guitar strum that happens every time you hit a certain point in charging up your “Harem King” meter, and a “chomp” sound when you get caught.  I mean, I guess no music is better than bad music, since it allowed me to substitute in my own music without having to mess around with the game settings, but that’s hardly a mark in the game’s favour.

I will say that I had a little bit of fun with the game.  I did find it mildly addicting, to the point where I was immediately retrying whenever I got a game over.  The problem was that my reason for doing it was less about enjoying the game and more about hoping that maybe if I just played long enough, there would be some hidden depth to the game: something to elevate it above being thoroughly mediocre.  And that’s my main problem with the game overall: the whole thing feels very low-effort, like it was just thrown together as a one-note joke without considering what would keep the player playing.

Now, some may make the argument that it’s a free game and I therefore can’t really complain about areas that the game is lacking.  However, to borrow a counter-argument, I will say that the game does cost something: it costs my time to play.  There are thousands of video games on the market today, and so many of them are immensely entertaining experiences.  Why should I waste time playing a game that doesn’t feel like it’s had the effort put in to be enjoyable?  Honestly, I’d rather not.  I had a significant amount of interest in the game early on.  However, in typical tsundere fashion, I find that my current reaction to it is simply to be cold and dismissive..

Dangit, I just wanted to make out with a kawaii shark.  Is that too much to ask?